TRACLabs has developed the PRIDE electronic procedure system as a means to create collaborative and interactive routine operating procedures. 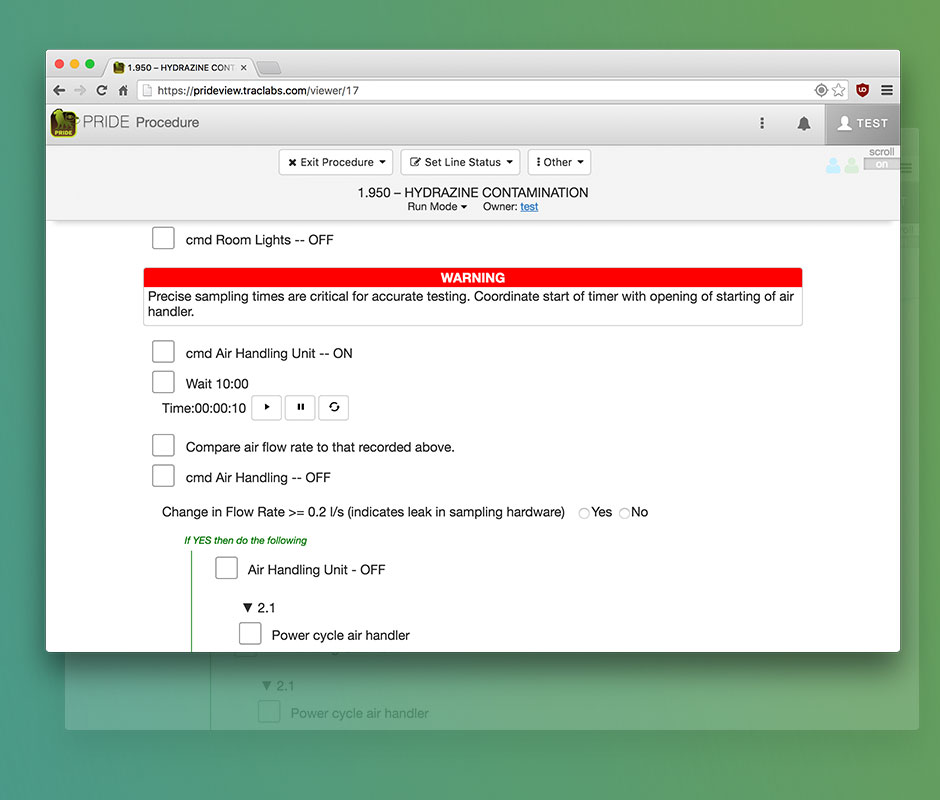 PRIDE consists of a procedure development tool (PRIDE Author), a procedure execution tool (PRIDE Automate), a procedure monitoring tool (PRIDE Monitor), and an interactive procedure operator interface (PRIDE View) all working off of the same XML-based representation of a standard operating procedure. This XML-based Procedure Representation Language (PRL) is at the heart of PRIDE and replaces Microsoft Word-based procedures, which are impossible to enhance with context-sensitive, augmented reality information. PRIDE has been developed in cooperation with NASA for ISS operations and for prototyping procedures for Orion. PRIDE is also being used by commercial space companies such as Sierra Nevada Corporation. TRACLabs is also partnered with a major oil field services company to deploy PRIDE for oil rig drilling automation.

PRIDE Author is a drag-and-drop development environment for procedures. PRIDE Author contains a palette of instructions that can be dragged into the procedure. These include instructions such as Command, Verify, Wait, Condition, GoTo, Record, Warnings, Figures, etc. This palette is customizable with specific instructions for specific customers. PRIDE Author also has an ontology that consists of, among other things, commands and telemetry that are available for use in the procedure. These commands and telemetry can be dragged into the procedure to provide automation capabilities. PRIDE users do not need any programming experience and can start with their existing standard operating procedures.

PRIDE View, is an interactive procedure user interface that supports both manual and autonomous procedure performance. PRIDE View is a browser-based interface in which the procedure is presented in a step-by-step fashion that is human-readable. Spacecraft telemetry is shown in-line with the procedure in the boxes along the right. As instructions are performed either by a human or automation they are checked off and focus moves to the next applicable instruction. Controls at the top of the interface provide for adjustable autonomy. Multiple operators can view and collaborate on a single procedure at the same time.